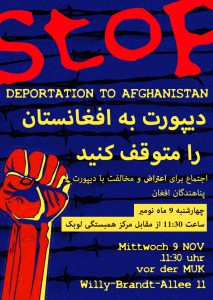 Our protest is against the agreement, that was signed between the EU and Afghanistan in early October. This agreement enhances the return of rejected asylum seekers, which in Germany alone is threatening tens of thousands of refugees from deportation.

Despite the unchanged security and persecution situation in Afghanistan, de Mazieres demand for the deportation to Afghanistan was passed to the foreigners authorities (Ausländerbehörde).

Deportations are contrary to human rights!
Afghanistan is not a safe country!
We demand the binding commitment of Interior Minister Studt and Prime Minister Albig that there will be no deportations from Schleswig-Holstein to Afghanistan!

Come and support our protest and demand on Wednesday, 9th of November, at 11:30 am in front of MUK, Willy-Brandt-Allee 10 (opposite of Walli and Solizentrum)!